Officials from Turkey, Azerbaijan, Kazakhstan, Kyrgyzstan, and Hungary have gathered to discuss developments on the efficiency of Trans-Caspian Transport Corridor. 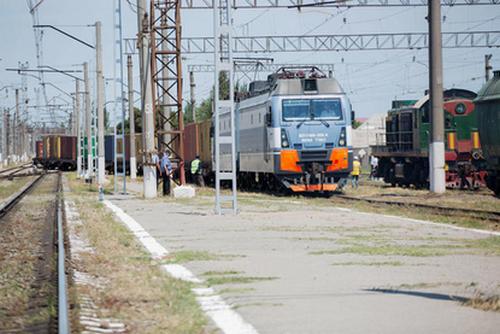 The 4th Meeting of the Ministers of Transport of the Turkic Council was held on April 17 in the capital of Kyrgyzstan, Bishkek.

In his opening speech, Turkic Council Secretary-General Baghdad Amreyev emphasized the important role that transport plays in the socio-economic development of the member states.

He noted that transport is one of the core areas of interest for the ongoing cooperation among the member states.

The secretary-general underscored the significant developments in the Trans-Caspian Transport Corridor taking place in the last couple of years, particularly the reduction of logistical expenses along the corridor, facilitation of customs procedures in the Aktau port due to single window system and reduction of port charges, which made the transport operations faster and cheaper, as well as opening of the Baku-Tbilisi-Kars railway.

Amreyev also noted the completion of projects such as the Marmaray Rail Tunnel, Yavuz Sultan Selim Bridge and Eurasia Tunnel, reconstruction of Bishkek-Naryn-Torugart Road and ongoing development of the China-Kyrgyzstan-Uzbekistan railway project.

Javid Najafov, Head of the Transport Regulation Department at the Ministry of Transport, Communications and High Technologies of Azerbaijan, updated the participants on the ongoing transport projects and modernization of the transport and logistics infrastructure of Azerbaijan.

He mentioned that the Government of Azerbaijan attaches particular importance to the optimization and facilitation of the measures for increasing the efficiency of the Trans-Caspian Corridor.

Highlighting that the Trans-Caspian Corridor is the common future of all Turkic Council member states, Deputy Minister of Transport and Infrastructure of Turkey Selim Dursun called on the parties to take necessary steps to phase out administrative and bureaucratic obstacles hampering the efficiency of the corridor.

The deputy minister asked the parties to work together in overcoming the practical difficulties encountered in road transport operations, border crossing points, and the Caspian Sea crossing to render the corridor seamless and sustainable route.

Dursun also informed the parties that Turkey, in cooperation with Azerbaijan and Georgia, has conducted for the first time a rail shipment from Mersin, Turkey, to Baku by means of a single consignment note under the Unified Railway Law (URL) efforts of the United Nations Economic Commission for Europe.

In turn, Vice Minister of Industry and Infrastructural Development of Kazakhstan Berik Kamaliev informed that the Kazakh government has already optimized the transport tariffs along the Trans-Caspian Corridor.

He also said that the development of logistic centers is one of the main components of foreign economic and trade relations of Kazakhstan with Turkic Council member states and stressed the necessity of providing efficient transport logistic infrastructure for the competitively of the corridor.

Addressing the event, Laszlo Mosoczi, State Secretary responsible for Transport Policy at the Ministry of Innovation and Technology of Hungary, emphasized that the government of Hungary is open for cooperation with Turkic Council member states.

Highlighting the Turkic States’ transit potential, he stated that Hungary with its close EU relations may work as a collecting and distributing point at the western end of the Trans-Turkic route.

He also stressed that Hungary welcomes the developments of bilateral collaboration and exchanges in the field of international road transport with the Turkic Council member states.

Another important topic of the meeting was the discussion of measures for the development of the Sister ports process between the Baku, Aktau and Samsun seaports of the Turkic Council.

Deputy Director General of the Baku International Sea Trade Port Akbar Karimov made a presentation on the current state of cooperation among the Turkic Council Sister Ports, as well as on their potential to attract freight flow in China-Europe axis, in his capacity as the host of the last Sister Ports meeting.

In turn, the head of the Ministry of Transport of Kyrgyzstan Zhanat Beishenov, noted that there is a permitting system of road transportation with Azerbaijan, and with this in mind, there is a need to increase the number of permission forms for road transport, which will eventually contribute to the development of the entire Trans-Caspian Corridor.

The parties agreed to convene the 5th meeting of Transport Ministers of the Turkic Council in Budapest, Hungary in 2020.

Trans-Caspian Transport Route (TITR) is a project initiated to improve transit potential and development of the countries of the Caspian region. This route runs from China through Kazakhstan, the Caspian Sea, Azerbaijan, Georgia, Turkey and further to Europe.

The project enjoys an opportunity to become one of the most attractive and profitable for consignors from European countries, while approximately 300,000-400,000 containers are expected to be transported via the Trans-Caspian International Transport Route by 2020, bringing huge financial profits to Azerbaijan.

New competitive tariffs have been introduced for the Trans-Caspian International Transport Route since June 1, 2016, putting the route among the cheapest and most profitable corridors for freight traffic.

In October 2016, Azerbaijan, Kazakhstan, and Georgia signed an agreement on the establishment of the International Association of TITR, whose office is located in Astana. Its activities are aimed at attracting transit and foreign trade cargo, as well as at the development of integrated logistics products via TITR.