Kazakhstan-Turkmenistan-Iran railway to be commissioned in 2014, president says

Kazakhstan-Turkmenistan-Iran railway will be commissioned in 2014, according to Turkmen President Gurbanguly Berdimuhamedov. 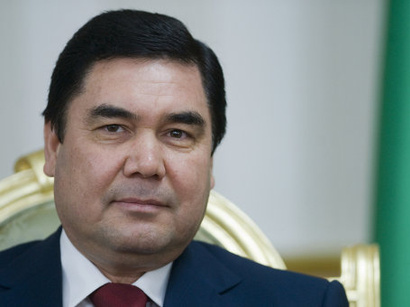 Berdimuhamedov made the remarks in Turkish city of Bodrum at a meeting with Kazakh President Nursultan Nazarbayev, Turkmen government said on June 6.

Turkmen and Kazakh presidents met as part of the Summit of the Cooperation Council of Turkic-Speaking States (CCTS), held in Bodrum, on June 5, according to the Turkmen government's message.

"Turkmen president invited his Kazakh counterpart to take part in the solemn ceremony of opening of this strategic railway, which being an essential part of the 'North-South' transport corridor, has not only regional but also global significance," the message said.

Turkmen government said that during the meeting the heads of Turkmenistan and Kazakhstan said the new railway will provide a convenient and economical transportation of goods to South Asia, to the Gulf ports, as well as in the opposite direction -to the Eastern Europe through Russia.

"Commissioning of the railway is also relevant, given its possible links with the 'East-West' transport communications, i.e. the 'China-Central Asia-Caucasus-Europe' transcontinental transport corridor," according to the message.

Aside from that, it will be possible to modally redistribute transit goods, i.e. shifting transportation from motor, marine and air transport to railway transport.

The 'North-South' project is being realized on the basis of an agreement signed in 2007 by Turkmenistan, Iran and Kazakhstan.

A project was launched in May, 2013 to link the railways on the Kazakh-Turkmen border. Currently, work is underway on the railway's site passing through the territories of Iran and Turkmenistan.

Initially, this railway will transport up to three or five million tonnes of cargo per year, according to the tentative estimates.

In the future the cargo transportation volumes will increase to 10-12 million tonnes per year.

Turkmenistan has land borders with Kazakhstan, Iran, Russia, Uzbekistan, and Afghanistan. The country also borders on the Caspian Sea with Azerbaijan, Russia, Kazakhstan and Iran.