INCHEBURUN STATION, IRAN – In a major development with implications for regional trade and global politics, the presidents of Kazakhstan, Turkmenistan and Iran launched a railway line connecting the three countries at a grandiose ceremony on the border crossing between Turkmenistan and Iran on Dec. 3.

Kazakh President Nursultan Nazarbayev, Turkmen President Gurbanguly Berdimuhamedov and Iranian President Hassan Rouhani participated in the opening of the 928-kilometre Uzen-Bereket-Gorgan railway stressing the importance of the new line for their economies but also for reconnecting, across the land and by rail, the areas that were once connected by the caravans moving along the Great Silk Road. The line allows direct delivery of goods along the shortest path among the states, but it also allows for land transportation of goods from the region to China and the Far East.

"Due to the laying of the railwayVisit in the direction of the Persian Gulf, the trade turnover this year [already] increased by 38 percent. It is an unprecedented event. We have a lot of reserves for developing cooperation and should use them for the benefit of our people," Nazarbayev said. On Dec. 2, he conducted an official visit to Turkmenistan first and later moved to the border crossing between Turkmenistan and Iran to witness, together with his two counterparts, the opening of the Turkmen- Iranian (Bereket-Gorgan) section, the last part of the railway.

"The importance of regional markets will now grow for our countries, as will the production oriented towards the Asian markets," Nazarbayev added.

The joint declaration to build the Kazakhstan-Turkmenistan-Iran railway was signed by the leaders of the three states on Oct. 16, 2007, with construction kicking off in 2009. The 146 kilometres of Kazakhstan's section were finished first in 2012; the following year it was linked to Kyzylgaa–Bereket, the Turkmen section. Through the combined effort, the three states built a more than 900-kilometre railway line from the Kazakh steppes, across the Karakum Desert in Turkmenistan and into the mountainous province of Golestan in northern Iran. The project was implemented with the assistance of the Asian Development Bank and Islamic Development Bank.

After the ceremony a cargo train with Kazakh grain passed through the border of Turkmenistan and Iran. It was a symbolic act, taking into account that grain, oil and oil products are expected to prevail in the structure of cargo flow, with the new corridor significantly increasing Kazakhstan's transit potential.

The importance of the railway for Kazakhstan's grain industry can hardly be overestimated, especially given the growingexport of grainto Iran. Iran has already become the biggest buyer of Kazakh grain and ranked first inimportof barley from the state. The export of wheat and barley to Iran increased almost threefold, from 280,000 tonnes to786,000 tonnes, in the first eight months of 2014.

"Last year, Kazakhstan supplied one million tonnes of wheat to Iran, while generally the demand in the Persian Gulf countries is for 9-10 million tonnes," Nazarbayev said at the ceremony. "We intend to supply steel, mineral fertilisers and other Kazakhstan-made products. Respectively, we will be buying needed goods from Turkmenistan and Iran." 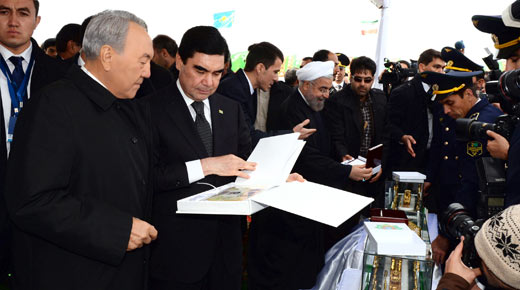 The main competitive advantage of the new railway is that it provides the shortest route for delivery, including transit, and in the future for passenger transport, resulting in an increase in business activity and growth of the welfare of the states. It is especially important to Kazakhstan and Turkmenistan, which do not have direct access to the world ocean, as the railway opens new opportunities for enterprises of both countries, stimulating trade and economic growth.

Nazarbayev stressed a major significance of opening the Turkmen-Iranian section for development of the whole Eurasian continent, particularly enhancement of direct contact among the three states, as the Uzen-Bereket-Gorgan line would increase flow of goods between the states, both in the northern and southern directions.

"We agreed to further use the geographical positions of our countries as a transit bridge between Europe and Asia in the most efficient way," Nazarbayev said. In addition, he underlined that through the railway Turkmenistan discovered new opportunities of delivering goods by establishing new routes through Kazakhstan to China and the Pacific Ocean.

At their meeting, the three heads of state agreed to establish a working group to determine the areas where mutual trade can be expanded and to explore prospects for cooperation in transport and logistics. The three leaders also discussed expanding the construction of roads and railways, logistical centres. They also reviewed trans-border cooperation, prospects of creating free economic zones and investment cooperation.

During the bilateral meeting with the Turkmen President in Ashgabat on Dec. 2, Nazarbayev drew attention to the need for further expansion of trade and economic relations. He underlined that despite the negative changes in the world, bilateral trade between Kazakhstan and Turkmenistan was growing, indicating development of the economies. "We need to use all the opportunities and resources in order to achieve a trade turnover at the level of a billion dollars," he said.

Berdimuhamedov also emphasised the urgency of strengthening bilateral relations, developing business contacts and cooperating in the fields of education, science, culture and sports.

"The Republic of Kazakhstan is an old and reliable economic partner of Turkmenistan. However, the interaction potential has not been fully revealed. I consider it necessary to conduct a thorough analysis of trade and economic relations between our countries. Both Turkmenistan and Kazakhstan are able to considerably improve trade turnover and diversify mutual supplies," he said, also stressing constructive cooperation between the states within international and regional organisations, including the United Nations, Organisation for Security and Cooperation in Europe and the Commonwealth of Independent States.

Referring to economic potential, the head of state highlighted that the trade turnover between the two countries in the first nine months of 2014 increased by 23 percent. "While the world is undergoing crisis and exports are declining, trade between our countries is growing, approaching $500 million. At the same time, even this dynamic does not reflect the full potential of our cooperation. In the near future, the first meeting of the joint working group on increasing trade turnover will be held," Nazarbayev said.

During his visit to Turkmenistan, Nazarbayev was also honoured with the title of Honorary Elder of the Nation for his contribution to enhancing neighbourly relations between the two countries.

The Kazakh and Turkmen counterparts also signed an agreement between their governments on cooperation in maritime transport, a memorandum on the establishment of the Turkmenistan-Kazakhstan international telecommunication transit route, an agreement on the establishment of the business council between the Turkmen Union of Industrialists and Entrepreneurs and Kazakhstan Chamber of Commerce, an agreement between the Balkan Mayor's office and the Akimat (Governor) of the Mangystau region on trade-economic, scientific-technical and cultural partnership and a memorandum of understanding between the Academy of Sciences of Turkmenistan and the International Turkic Academy.