Caspian declared “sea”- not lake, maritime border lines yet to be elaborated

Leaders of the five Caspian littoral states met on Sunday, August 12, for the Fifth Caspian Summit in Kazakhstan’s port city Aktau to sign a landmark declaration determining the legal status of the Caspian Sea and aiming to end the legal limbo over its resource-rich waters. 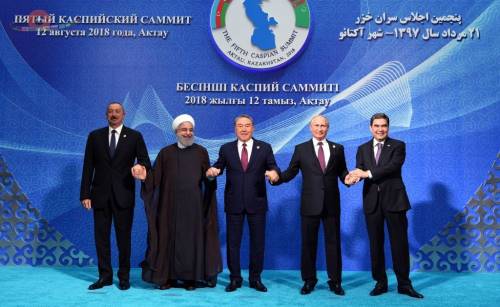 However, the exact demarcation of the Caspian seabed still remains an open issue among the four ex-Soviet states and Iran.

“The Caspian Sea is an effective bridge of cooperation not only between the countries covered by it, but also between Asia and Europe,” Kazakhstan’s President Nursultan Nazarbayev told the summit opening, stressing that despite the complexities of the negotiating process, the five countries reached an agreement.

For decades the status of the inland sea and the issue of how to divide up the waters and its substantial oil and gas reserves had been a source of disputes between the countries.

After the dissolution of the Soviet Union rendered obsolete legal agreements between Tehran and Moscow, the shorelines failed to be divided between the four newly emerged states – the Russian Federation, Kazakhstan, Azerbaijan, and Turkmenistan – and Iran, festering conflict over territorial allegiance between the Caspian Five.

The five states had different views on maritime boundary delimitation, using mineral resources, demilitarisation, and security as well as international law enforcement. Especially Iran, Azerbaijan and Turmenistan in the past have tangled over the rights to oil and gas fields, often accompanied by hostile naval manoeuvres on the water body itself.

In the signed Convention on the Legal Status of the Caspian Sea, the draft of which was agreed during the preparatory meeting of foreign ministers in December 2017 in Moscow, the five signatory parties agreed that the water surface will be legally treated as a sea, keeping it open for joint use, whereas the seabed will be considered as a lake and therefore accessed under international legal framework.

With this, regions up to 15 nautical miles from the shore will be treated as the land of each subsequent country, while a total of 25 miles will be set as fishing area by adding 10 nautical miles to this distance. The other parts will be neutral zones for common use.

This, however, also means that the exact delimitation of the oil- and gas-rich Caspian seabed will require additional agreements between the littoral nations, although a previous draft of the declaration, published briefly on a Russian government website in June, had suggested a more clear outcome.

“We should recognise that there are more important issues that should be addressed,” Iranian President Hassan Rouhani said referring to the Soviet times agreements between Moscow and Tehran.

“The issue of determining the straight baselines on our coasts is important, on the delimitation we should agree on later between the five parties and develop an effective mechanism. Without it, there will be no effective implementation of the convention,” Rouhani emphasised.

According to Nazarbaev, the leaders furthermore agreed to set up a “special mechanism of regular five-party consultations under the auspices of the foreign ministries” to implement the provisions of the convention.

“The Convention not only creates a favourable legal basis, but also opens the way to new a cooperation basis,” the Kazakh leader emphasised.

Turkmenistan, an energy-rich but isolated country, which hoped to benefit from sending gas through a yet to-be-built underwater pipeline in the Caspian towards Europe, has to downscale its ambitions until the demarcation lines are finally drawn. Nevertheless, with the convention, Moscow has ceded ground on underwater pipelines.

“Laying of pipelines on the Caspian seabed would also be an outcome long hoped for by European officials in Brussels as it could pave the way for the transport of natural gas from Turkmenistan to Europe, via the so-called Trans-Caspian Gas Pipeline, a critical development for European energy diversification which Russia and Iran have opposed so far,” says Nicholas Gosset, research fellow at the Royal Higher Institute for Defence (RHID) in Brussels.

Russia has in the past years been following the strategy to contain the country as gas supplier for the West in order to maintain its energy monopoly. Together with Iran, it could still attempt to block the pipeline, which expert rate to be approximately up to $5 billion in value.

In the end, the crucial question remains: What’s in this for Russia? “Russia is unlikely to welcome competition in the form of gas from Turkmenistan, which could potentially drive prices down and eat into state gas company Gazprom’s market share,” says Gosset.

“Yet, whether this outcome would be allowed from now on, important reservations nonetheless remain with regard for Ashghabat’s possibility and will to fill up the tube for real,” Gosset believes, pointing also to the existance of significant technical challenges related to the geological nature of Caspian seabed.

Iran, who under the signed convention remains with the smallest territorial area of the Caspian Sea, is viewed as one of the losers of the negotiation process.

The signed agreement also limits foreign military presence along the 7.000 kilometre long shoreline to the five signatory nations bordering the Caspian Sea – Russia, Iran, Azerbaijan, Kazakhstan, and Turkmenistan – as requested for long by Russia and Iran.

Calling the signing of the agreement a “milestone event”, Russia had been seen as one of the driving forces behind the deal, in Aktau Russian President Vladimir Putin also argued for increased military cooperation between the Caspian Five.

“It is crucial that the convention governs (…) maritime shipping and fishing, sets out military cooperation among [Caspian] nations and enshrines our states’ exclusive rights and responsibilities over the sea’s future,” said Putin considering this as personal victory after already having lost ground making concessions on the building of underwater pipelines.

“There are unstable regions closeby: the Middle East and Afghanistan,” Putin pointed out. Therefore, according to him it would be “important” to “build a systematic front against terrorism and security issues.”

Moscow had repeatedly used the Caspian Sea for military power play in the region, most recently in 2015, when the Russian navy fired cruise missiles into Syria, intervening in the war in support of Syrian President Bashar al-Assad.

The forging of inadmissibility of a foreign military presence in the Caspian Sea is also an attempt on the Russian side to rule out future possible NATO involvement in the region through the framework of its Partnership for Peace (PfP) Programme.

According to Gosset, however, there is no concrete evolution of Russian will to turn the Caspian into a key element of great power rivalry with the West. “In this regard, the evolution of the situation in the Black Sea (battle between Moscow and Kiev around Crimea) is much more worrisome.”

In addition to the status deal, a number of five-sided intergovernmental documents were signed on cooperation in economy, trade, transport and security.